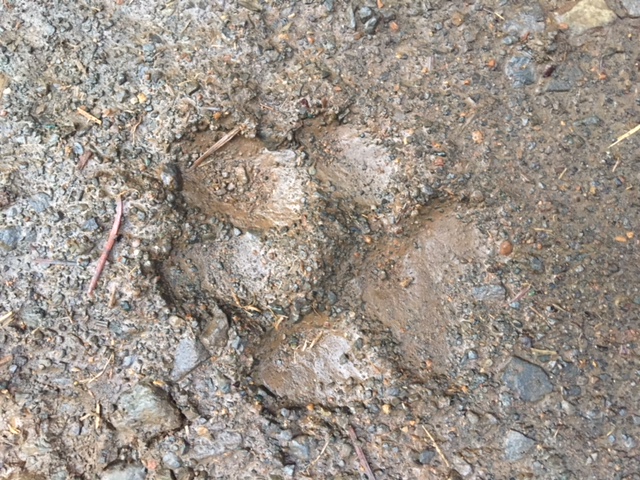 Cats have been on my mind a lot lately.

No, I haven't been watching videos online. I've been out riding and hiking. And it appears it's just a matter of time before we cross paths.

This all started last March, when my black lab Ridgely and I were riding one of our local logging roads here in Oregon.

These rides begin with about an hour or so of climbing followed by the return descent when I'm alone. At age 12, the countless hours and miles on the trail have caught up with Ridgely, so we drove to the gate and went for a shorter outing.

On the way back down, we swept around a corner to see a rather huge cougar on the road about 100 yards ahead. As soon as we came in its sight, it stopped sniffing the ground, took a look at us, then took one hop followed by a tremendously impressive 12-plus foot leap as it disappeared into the woods.

Yikes! That will get your heart-rate going.

Not much you can do when there is only one way out, so I slowed to a crawl on the steep descent, pulling out my big knife — which I realistically call my False Sense of Security — and positioned the bike between Ridgely and the cougar's side of the road.

I whooped and hollered as we crept past the exit zone. We made it out just fine.

Since then, the evidence of cougars has increased. I ride up there a couple times a week, mostly alone now that Ridgely can't keep up.

Last week I rode past a deer leg, from hip to hoof, cleaned down to the bone. Another half mile up I found a second leg.

I figure that's good news for me. The cougar(s?) appear to be well fed.

Recently some other gates were opened up for hunting season. On a different route I found a number of trucks driving around back where I usually have miles and miles to myself.

I passed one truck off to the side, the driver surveying the meadow with binoculars. When he eventually drove past me five minutes later he reported that he stopped because a cougar crossed the road right in front of him.

This all comes at a time when cougar news is hot in the Northwest. Two mountain bikers outside Seattle were attacked in the spring, with one killed, and a hiker near Mt. Hood was killed this summer.

If that's not enough, I've had a couple cougar dreams recently.

I know I'm no match for a cougar, even if at any point during an attack I actually managed to get a hold of my knife.

More than a few years ago, this would have spooked me to the point of changing my routines, avoiding some places.

These days, I just can't seem to do that. I'm so lucky to be able to roll out of my driveway and in 20 minutes or so be lost in the comfort of nature. I wouldn't trade that experience for anything. Literally.

I've said for years I plan to live to 130. I still believe that. However, if some cougar decides to change my course of history, it will fall under DDWIL — Died Doing What I Love ...